The answer to this question is…there are too many variables and we’ll never exactly know the exact value of an assist. For example, variables like, what were the 3 other players on offense doing to help the team on that particular made shot?  Was the shot difficult or was the shooter wide open? Was it an easy two handed chest pass or was it a tough 1 handed, through traffic/no look, bullet pass for a layup? (Meaning does the scorer earn more of the basket credit or does the player assisting the basket get a higher percentage of credit for setting an easy bucket up).

HOWEVER, we can estimate what an assist is worth towards the 2 point or 3 point basket. By estimating credit for a basket we can also create an adjusted offensive game score (OGS) for each player and compare that number to the actual number of points each player scored during the game.

As I’ve started working with the new assist networks ↓, that we’ve added to the site, it’s really peaked my interest on the value of an assisted basket and how much credit each player deserves. 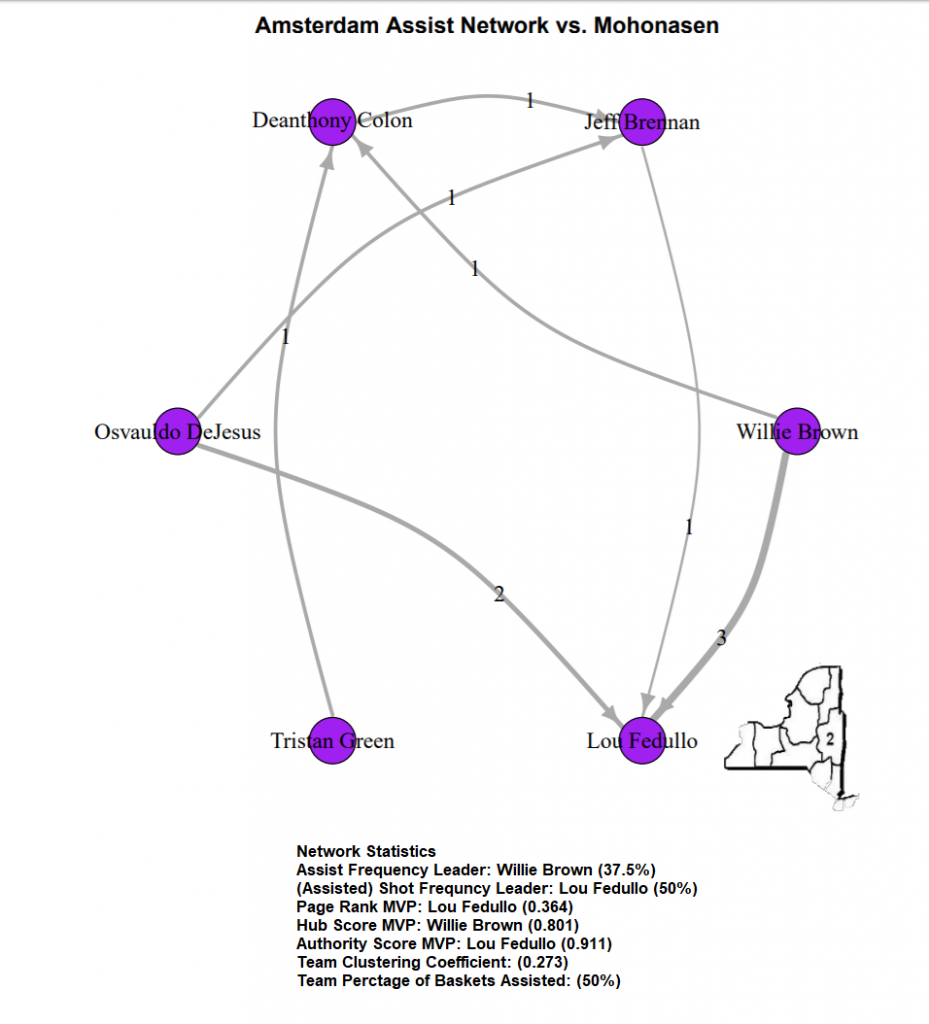 First we need to establish what an assist is.

In basketball, an assist is attributed to a player who passes the ball to a teammate in a way that leads to a score by field goal, meaning that he or she was “assisting” in the basket. There is some judgment involved in deciding whether a passer should be credited with an assist. An assist can be scored for the passer even if the player who receives the pass makes a basket after dribbling the ball. However, the original definition of an assist did not include such situations,[1] so the comparison of assist statistics across eras is a complex matter.

Only the pass directly before the score may be counted as an assist, so no more than one assist can be recorded per field goal (unlike in other sports, such as ice hockey). A pass that leads to a shooting foul and scoring by free throws does not count as an assist in the NBA, but does in FIBA play (only one assist is awarded per set of free throws in which at least one free throw is made).

Below I’ll post work by Dean Oliver, author of Basketball on Paper, that tends to agree with the percentage credit numbers I’m going to use for the offensive game score (OGS) I’ve created. I’ll show my calculations for the players game score as well.

Here’s an older theory written by Oliver talking about individual points and his view of what an assist means.

The sum of all teammates’ individual points produced should be very close to the number of points actually scored by the team.

This is what I’m comfortable using as an assist credit for each basket made, at its most elementary form, that got me started on creating my own version of an offensive game score (OGS) for each player.

The same can be done for a three pointer.

That gives the person that scores each basket 75% of the credit for scoring a 2 point basket or a 3 point basket. The person assisting the basket receives 25% credit. Those numbers are very similar to Dean Oliver’s original thought that the person scoring a 2 point field goal should get 75% credit and a 3 point field goal should get 85% credit. In his last line of his points created piece, on what an assist is worth, he says this “The sum of all teammates’ individual points produced should be very close to the number of points actually scored by the team.”  Using 75% credit for the scorer for both 2 and 3 point field goals the sum of all the individual points now equal EXACTLY the number of points scored by a team.

I’ll show you in the game information below how each player’s point total gets adjusted and how that new total still adds up to their team total. Here’s the actual scoring box score and below that is the points produced worksheet I’ve created for a HS Girls’ game on 8/5/2017. It only lists 1 team, Shenendehowa. Their total point total for the game was 59. The new offensive game score for each player, totaled up, also adds up to 59.

Key for chart above ↑

(Multiplication factors are listed above columns if needed)

Act/Adj. = Actual points divided by Adjusted total. We’ll use that percentage and break the player down into 3 profiles for the game based. They are Scorer, Scorer/Distributor, & Distributor.

-Jillian Huerter scored four points on 1 2pt field goal and 2 FTM. She also had 7 assists. So now we have to figure out, using the table above, how much each basket and assisted basket is actually worth. So starting with 0 we start the adding up her game score:

So adding all of the totals up, Jillian Huerter’s created point total for the game was 7.5. Well above her actual point total of 4. By dividing here actual point total by her game score total we get a pct of 187.5%. Looking at the thresholds for the 3 offensive profiles she classifies as a Distributor this game. (Which makes sense as she only had 1 made field goal but assisted on 7 other made baskets)

**Note the profiles are only based on this game. It shouldn’t paint a player with that label based on 1 game. If by accumulating stats all season and the numbers still place the player in a certain profile then that’s a different story.)

Zero credited assists so total offensive game score is 6.75. Slightly less than her 8 points on the scoreboard. Next divide 8 by 6.75 and get 84.38%. Checking that percentage with the player profiles Catherine falls under a scorer for this game.

– Meghan Huerter was the leading scorer for Shenenedehowa with 15 points on 5 three pointers, 1 two point FG and 1 FTM. She also had 1 assist.

Her offensive game score equals 12 points for the game. Slightly less than her actual point total. It’s reduced because all 5 of her made baskets were assisted. Meghan still tied for game high in adjusted rating with Rylee Carpenter.

Rylee Carpenter scored 13 actual points on 6 made 2pt. field goals and 1 made FT. Her (OGS) adds up to twelve as 4 of her baskets were unassisted so she received the full 2 points for each basket. Her actual points divided by offensive game score 13/12 = 92.31%. That still classifies her as a scorer as she didn’t have any assists on the night to upgrade her profile to a potential Scorer/Distributor.

That brings us to the last player we’ll profile that actually did classify as a Scorer/Distributor. Her name is Anna Milham and she scored 9 actual points but her offensive game score ended up being 9.75. Here’s how she got to that 9.75 game score.

Anna’s percentage ended up being greater than 100% (9 real points divided by 9.75 game score) so her profile fit Scorer/Distributor as she was able to score on her own and contribute to other player’s scoring by adding 2 assists.

The OGS (offensive game score) is just another way to see how players are contributing beyond total points in the box score. They can help decide who may be the offensive MVP of a game when breaking down how many points they accumulated and if they shared the ball by assisting other players.

This rating is for offense only and doesn’t account for a player’s defense.

In a era of advanced stats for everything add (OGS) Offensive Game Score to the never ending list. I do feel comfortable with it as it does credit players for sharing the ball, getting to the free throw line & making them and ultimately scoring field goals assisted and unassisted. Scorers are always going to think they deserve more credit than given and players assisting baskets are always going to feel like they deserve more credit for setting the made field goal up.