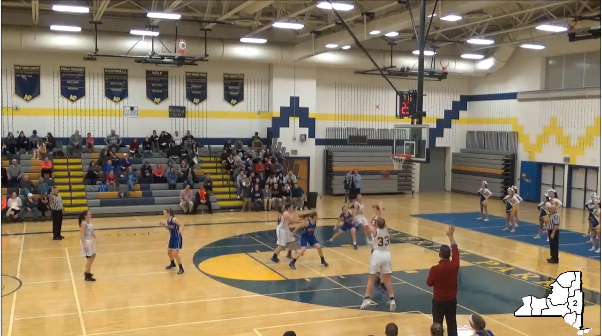 Averill Park’s Mallory Wood knocks down a 3. The Lady Warriors are currently ranked as the top Girls team in the section2basketball.com computer rankings

Here’s a way too early look at Section 2 teams according to the current section2basketball.com computer rankings. Normally I wait until January 1st to post the rankings publicly as I like to have more game data but I decided to post them early this year. The numbers will still give you an idea which team/classes are most competitive. In some of the classes, the teams are so close that it wouldn’t surprise me at all if a team that’s currently 5th-8th in the class will be a team near the top when we reach sectional tournament play. On the flip side you’ll find a few classifications that have a solid favorite as league play begins.

The rankings take each game result into account and they factor recent results a bit higher. However, they are very volatile at this point based on only a few early season results. They are also meant to project an outcome of a game if 2 teams played today. The rankings are only as good as the information I have in the database. If I don’t have all of a team’s scores the ranking may be slightly skewed for that team. Help us and report your scores to info@section2basketball.com or tag us on twitter @section2hoop.

Talk about parity? 9 teams currently separated by less than 10 points. Should be a great sectional bracket from the 1st round to the final

Shenendehowa is a slight favorite by the numbers but 7 teams look like contenders right now.

Mohonasen is the favorite with Lansingburgh and Amsterdam right behind them. Also don’t be surprised if Queesnbury, Averill Park and Gloversville contend as well.

Averill Park is currently rated the strongest team in the Section for Girls teams and aren’t in the biggest class (AA). They have been dominant so far this season and would expect that to continue. Holy Names, Amsterdam, Scotia, Queesnbury and Gloversville are also very strong teams in this class.

Mekeel Christian and defending sectional champ, Glens Falls, look strong again. However this class is deep.  Don’t rule out teams like Watervliet, Catskill, Hudson, and Schalmont either. Followed below them are dangerous teams like Schuylerville, Bishop Gibbons, Cobleskill and Fonda.

Tamarac looks like the favorite with Glens Falls right behind them.

Oppenheim-Ephratah/St Johnsville, Argyle and Whitehall are the current favorites. I would expect Fort Ann, Germantown, North Warren and Northville to continue to improve as the season goes on.